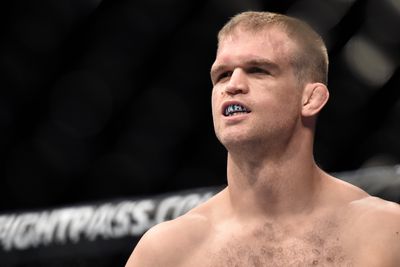 Evan Dunham delivered a dominant performance at The Ultimate Fighter 22 Finale earlier tonight (Dec. 11, 2015) inside “The Chelsea” at The Cosmopolitan in Las Vegas, Nevada, defeating Joe Lauzon via unanimous decision.

Two judges scored the bout 30-26, while the third judge had it 30-27 in favor of the 33-year-old Lightweight veteran.

The story of the fight was Dunham’s striking, which was dominant for the entire 15 minutes. His multi-strike combinations were accurate and extremely effective and Lauzon did not have an answer for them.

The two 155-pound standouts kept it standing for the first frame, with Dunham getting the better of the early exchanges. Lauzon attempted to clinch and push Dunham against the fence, but the Oregon native avoided it. Dunham continued to land with his combinations for the remainder of the round, throwing a much higher volume of strikes than Lauzon.

Dunham continued to have success with his striking in the second round. And with just under three minutes left, he secured a body lock on Lauzon and took down the New England native momentarily before keeping him pressed along the fence. Lauzon was able to land a short elbow, which opened a cut above the right eye of Dunham, but it did not deter him in any way. Lauzon would escape the clinch, but when they returned to the middle of the Octagon, the Robert Drysdale Brazilian jiu-jitsu black belt continued to land with success, connecting on a pair of knee strikes toward the end of the round.

It was more of the same in the third round as Dunham continued to land on Lauzon. The submission specialist did try a jump-in scissor takedown at one point, but Dunham avoided the takedown. Dunham added body kicks into the mix and they blended in nicely with his multi-strike combinations.

It was an ….View full article