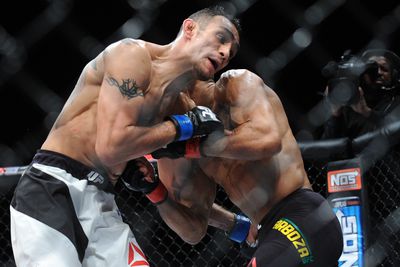 Last night (Fri., Dec. 11, 2015), Tony Ferguson and Edson Barboza brawled at The Ultimate Fighter 22 Finale inside “The Cosmopolitan” in Las Vegas, Nevada. In an incredible fight, Ferguson submitted his opponent. Find out how below!

Ferguson has simply been running through fighters. “El Cucuy” has finished the majority of the men he’s faced inside the Octagon, and he was hoping for that trend to continue in this bout.

Meanwhile, Barboza has been slowly shoring up the holes in his game since joining the UFC. After these improvements, Barboza was now planning to finally go on a title run.

Instead, Ferguson made a strong bid for a title shot.

In classic Ferguson style, the top contender started wildly. In the first minute, Ferguson walked into about a dozen counter strikes while trying to drill his opponent with punches, failed on a takedown attempt, and then attempted a side roll into a kneebar.

From the attempted kneebar position, Ferguson landed an illegal upkick, which cost “El Cucuy” a point.

Back on their feet, Ferguson continued to attack with relentless pressure. However, Barboza did a fantastic job of countering his opponent, both with kicks and hard body punches. He even caught a kick and landed a brief takedown.

Though he was out-struck and lost the round, Ferguson never stopped coming forward and did land his own shots.

Ferguson continued to pressure to start the second, and he used an elbow to open up bloody cut. Barboza responded by catching a kick and scoring with another trip takedown, but he wasn’t able to do anything before Ferguson returned to his feet.

The next highlight came when Ferguson ….View full article