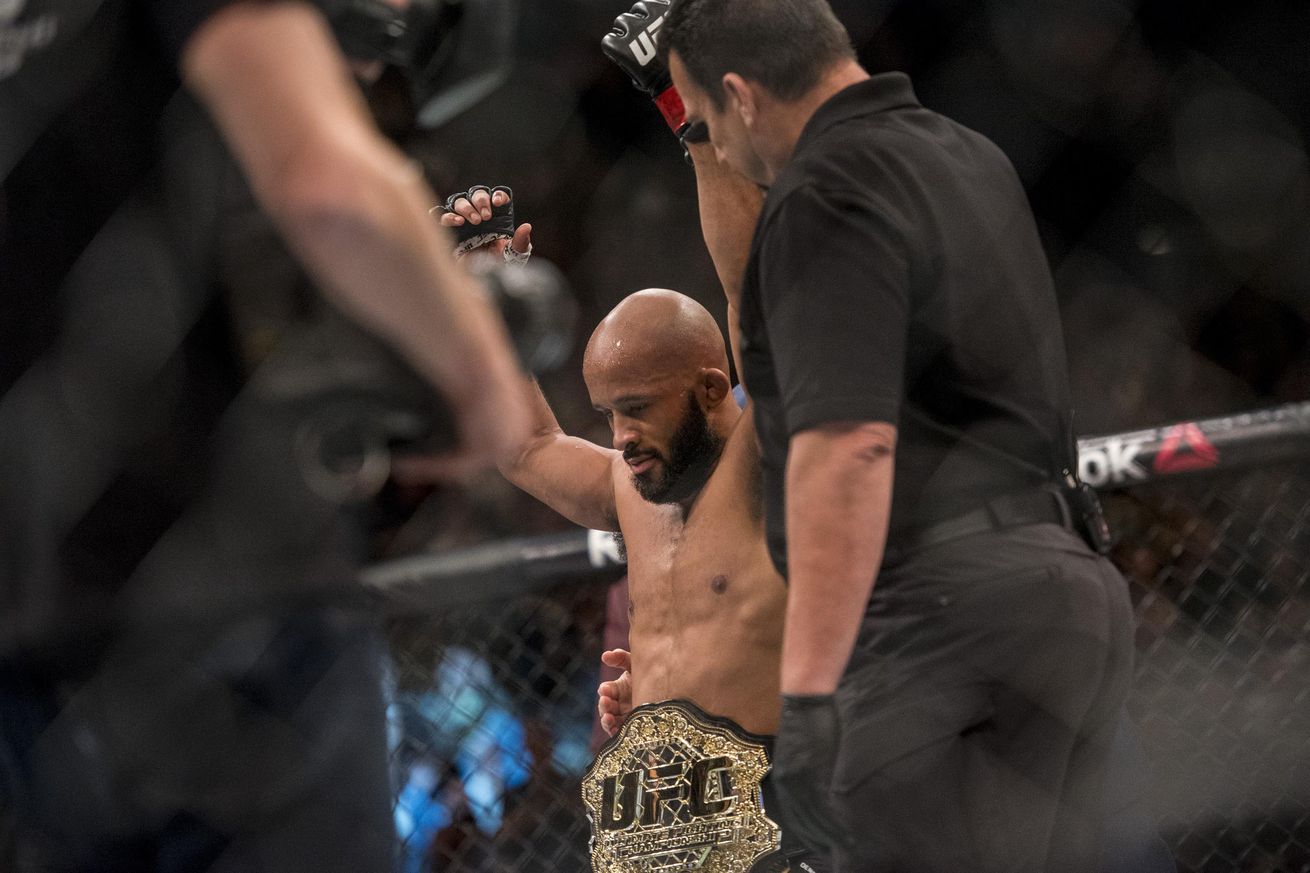 Johnson’s title reign has been so definitive that it called for the creation of this season of TUF, pitting regional champions against each other to build the division and create a challenger. Last night, “Mighty Mouse” was forced to defend his throne against the winner of that contest. As expected, Tim Elliott was a massive underdog. Any success at all would be a shock to most fight fans, but Elliott attacked the champion with little respect for his skill or credentials.

After a wild exchange on the feet, Johnson hit a quick double leg and attacked an arm bar. However, Elliott countered and came out on top, where he began attacking with a guillotine choke. He very nearly secured the hold, and he transitioned to a d’arce choke as his opponent scrambled. Again, it was close, but Johnson’s defensive grappling allowed him to survive and reverse position. Elliott scrambled back to his feet and went wild. He stunned his opponent and then landed a takedown to end the round.

Johnson landed a takedown early in the second round and avoided the guillotine choke. This time, he was able to pass guard and avoid scrambles, which allowed him to land decent ground strikes. Additionally, he hunted for his far side kimura and the rear naked choke, but Elliott defended well.

Elliott actually finished the round on top, but Johnson definitely tied things up on the scorecards.

Johnson landed some nice low kicks before the fight went to the ground. Elliott actually wound up on top after the first scramble and landed some hard — if awkward — ground strikes, but Johnson reversed position before long. Once Johnson was actually able to establish top position, he was in control of the fight. He wasn’t able to land anything devastating, but Johnson was winning the bout.

Elliott stayed active with strikes from his back, but that doesn’t win rounds.

The fourth round continued in similar fashion. Elliott’s weirdness in the stand up allowed him to land a few strikes, but Johnson didn’t waste much time in changing levels and dumping him down to the mat. This time around, Johnson was more effective with his top control. He threatened with a deep rear naked choke at one point, and he landed some hard blows from crucifix as well.

It was the best round yet for the champion.

Elliott defended a takedown and landed a big slam of his own to start the final round. Unfortunately for the underdog, Johnson reversed him when Elliott looked for the guillotine choke. From top position, “Mighty Mouse” was just too good. He flowed around Elliott’s attempts to stand up or reverse, and he controlled his opponent to the final bell.

Johnson’s incredible wrestling and beautiful top game are the reason that he won this bout. On the feet, Elliott’s weirdness proved to be a strong foil, but Johnson was able to establish dominant positions and completely shut his foe down.

Johnson is just too good.

The champion’s blend of submission attempts, guard passing, and ground strikes is world class. His opponent is never truly safe, as Johnson just keeps advancing toward a potential finish. It didn’t materialize last night, but it allowed him to contain a wild man and retain his title. Next up, Demetrious Johnson should square off with Joseph Benavidez a third time, as “Beefcake” is the most deserving contender.

Elliott is game as they come and truly doesn’t care inside the Octagon. He really forced Johnson to avoid striking with him, which is an accomplishment on its own. Furthermore, very few men have taken down Johnson, but Elliott accomplished that goal multiple times.

Additionally, he came pretty damn close with those submission attempts in the opening round.

Aside from that, Elliott’s inability to stop his opponent’s guard passes and return to his feet cost him. He simply couldn’t get back to the areas he was finding success, and Johnson refused to give him any ground. Still, Elliott proved himself a top contender and worthy member of the Flyweight elite.

Last night at TUF 24 Finale, Demetrious Johnson defended his strap opposite Tim Elliott. Will Johnson ever lose his belt?