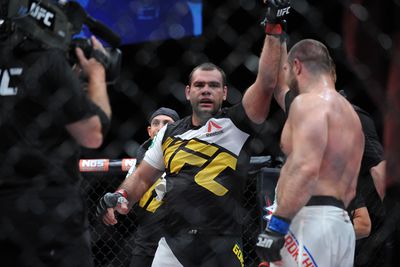 It’s time to see who got paid …

Following an exciting The Ultimate Fighter 22 (TUF) Finale mixed martial arts card last night (Fri., Dec. 11, 2015) from inside “The Chelsea” at The Cosmopolitan in Las Vegas, Nevada, it’s now time to check out which combatants earned the biggest slice of Reebok sponsorship pie.

For the complete TUF 22: “Edgar vs. Mendes” fight card and results, including post-fight recaps and analysis, click here and here.

Former Heavyweight title contender Gabriel Gonzaga netted the biggest paycheck and picked up $20,000 for his snoozefest in the FOX Sports 1 “Prelims” main event opposite Konstantin Erokhin, who scored just $2,500 for his efforts.

Let’s take a look at the rest of the Reebok payouts courtesy of MMA Junkie:

And the less fights you have under the ZUFFA banner … well, the less you get. If you have a problem with the structure, take it up with UFC, not Reebok.

According to the report, fighters will ….View full article