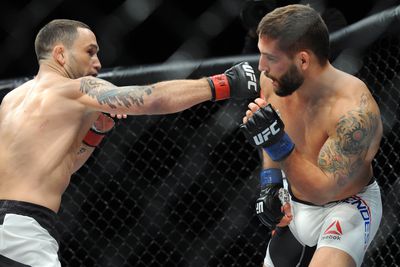 Usually I preamble my report cards with an overall impression of how they fared in terms of capturing the attention of fight fans and delivering on the promises of the sweet, sweet violence.

But considering we’re hours away from the third UFC card in less than 72 hours when UFC 194 prelims get underway, I’m going to jump right in.

In the past several months one thing had become apparent for UFC president Dana White. He had taken a disproportionate level of interest in several fighters, most notably Ronda Rousey, Conor McGregor, Paige VanZant and Sage Northcutt. Two of the four have since fallen in spectacularly one-sided fashion, while another was somewhat exposed. Could the fourth chosen one follow suit tonight? We’ll find out.

With her girlish good looks, smiling exuberance and marketability, Paige VanZant rose from an inexperienced fighter to main event star practically overnight. And her UFC resume seemed to partly back the decision of matchmakers, dominating her first three opponents en route to a spot under the bright lights against Rose Namajunas.

As for Rose, prior to the fight her career seemed to be going in the opposite direction. After ripping through the TUF 20 girls in 2014, she appeared on the finale riding a three fight winning streak, all by way of submission. But her loss to Carla Esparza in the finale was so one-sided, such an utter beatdown, that it looked as though all the wind had been sucked from her ….View full article