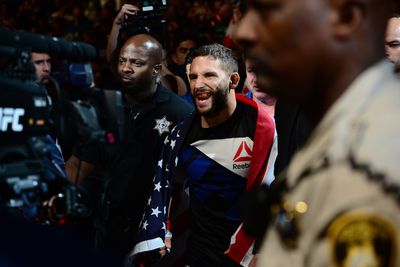 Frankie Edgar and Chad Mendes will clash TONIGHT (Fri., Dec. 11, 2015) at The Ultimate Fighter (TUF) 22 Finale inside “The Cosmopolitan” in Las Vegas, Nevada. In a match up of wrestle-boxers, what adjustments must be made for either man to claim victory? Find out below!

Top-ranked Ultimate Fighting Championship (UFC) Featherweight contenders Frankie Edgar and Chad Mendes will throw down this evening (Fri., Dec. 11, 2015) in the co-main event of The Ultimate Fighter (TUF) 22 Finale inside “The Cosmopolitan” in Las Vegas, Nevada.

Since dropping to 145 pounds, Edgar has once again established himself as an elite threat to anyone in the weight class. He dropped a close decision to division champion Jose Aldo in his debut, but has since rattled off four straight wins, showing improvements during that win streak.

Meanwhile, Mendes is in a strange situation. After coming up short in one of the greatest fights of all time with Aldo, he brutalized Ricardo Lamas before getting stopped in a short-notice bout with the Interim strap-hanger, Conor McGregor. Regardless, Mendes is also one of the best in the world and is looking to regain some momentum here.

In this bout, volume and conditioning will be key. Early in the fight, Edgar is not likely to have any success hurting his opponent with punches or landing any takedowns.

With that in mind, ….View full article