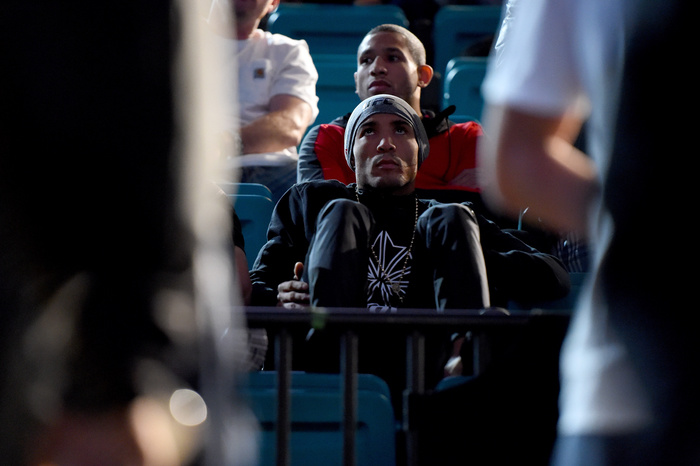 This morning, Rafael Dos Anjos confirmed that he had broken his foot during training, and pulled out of his main event bout with Conor McGregor at UFC 196. With the event just eleven days away, the UFC is scrambling to find a suitable replacement. Although the Conor-RDA match was a “super fight” at a higher weightclass than Conor usually fights in, the company has not ruled out falling back on an interim title match—it just needs to find a featherweight contender who is willing.

According to a Combate interview, the UFC reached out to Jose Aldo, who has been adamant about being granted a rematch, saying on social media that he would not accept any other fight upon his return.

“Dana (White) called me, telling what happened and asking if Aldo was in shape to fight,” said Jose Aldo’s manager Andre Pederneiras. “I said he wasn’t and that there wasn’t enough time, and unfortunately he wouldn’t be able to fight next week.”

Frankie Edgar also declined the opportunity, according to Dana White. Speaking to Kevin Iole of Yahoo Sports, the UFC President expressed frustration that both featherweight contenders won’t step up.

“It’s amazing, to be honest with you. All of these managers are out there jockeying and they say they want to fight Conor. You hear these guys screaming, ‘Conor, Conor, Conor,’ but then when it comes time to take a fight, they turn it down and they’re hurt,” he said in the interview.

He went on to point out the Conor would have been good with either fighter:

“I swear to God, he said, ‘I’ll fight anyone.’ He just doesn’t give a [expletive]. People talk about this strained relationship between us and Conor, and he has a different style than I’ve ever seen, but I have never seen anyone ….View full article