Home MMA News Urijah Faber ready for title shot after being ‘released from the friendship’ with T.J. Dillashaw
ShareTweet 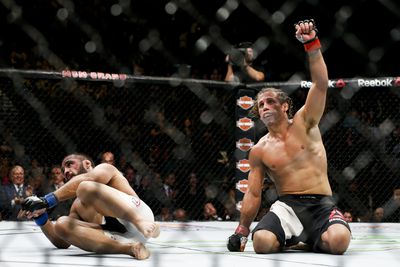 LAS VEGAS — Urijah Faber suppressed his title aspirations for over a year, allowing former friend and teammate T.J. Dillashaw to soak in the shine of being UFC bantamweight champion. But now that the relationship between Dillashaw and Team Alpha Male has been publicly severed, Faber is ready to throw his name back into the running.

“Fighting for the title is what my goal is, and I took myself off the market for a while,” Faber said at Saturday’s UFC 194 post-fight press conference. “It’s kind of a weird thing when you’ve been at the top of a division you’ve been in your entire career to kind of take a backseat because of friendship. That’s off the table now.

“I’ve been released from the friendship. So I’m going to train my butt off and I’m hoping I get that call and I’ll be ready.”

Faber captured a hard-fought unanimous decision over Frankie Saenz at UFC 194, and afterwards he made it clear that he wants the division’s next title shot, even if it means fighting his old teammate and protégé Dillashaw.

The timing works out perfectly for Faber, as Dillashaw and perennial Team Alpha Male rival Dominick Cruz are slated to square off on Jan. 17 at UFC Fight Night 81.

Faber has obvious history with both men, and though he reiterated past comments that Dillashaw would make for a better sell, he would ultimately be OK with either match-up as long as it got him where he wanted to go.

“I would say the one that everybody wants to see is the classic story, it’s like a mix between Rocky 4 and Rocky 5,” Faber said. “My boy (Sylvester) Stallone actually left a voice message and gave a little Rocky Balboa shout-out there. It really doesn’t matter too much to ….View full article