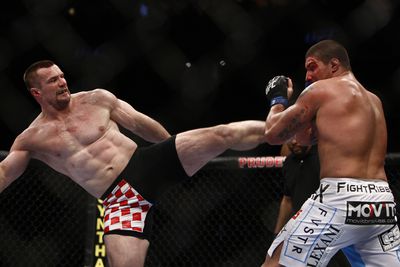 The sequence of events regarding Cro Cop’s injury, retirement from the UFC and potential anti-doping violation seems a bit murky. But USADA clarified in a statement to MMA Fighting via spokesperson Annie Skinner on Friday that Cro Cop’s doping case “was initiated prior to his retirement.”

“As the independent organization in charge of the UFC Anti-Doping program, USADA handles all results management and adjudication processes in accordance with the UFC rules,” Skinner wrote in an email. “Although Mr. Filipovic has announced his retirement publicly, this case was initiated prior to his retirement, and as required by the UFC Anti-Doping Policy, will be fully adjudicated.”

On Tuesday, Cro Cop, whose real name is Mirko Filipovic, announced on his website that he was pulling out of his fight with Anthony Hamilton at UFC Fight Night: Henderson vs. Alves on Nov. 28 in Seoul, South Korea due to a shoulder injury. Cro Cop added that injuries have forced him to retire from the sport after 14 years.

Things took a turn Wednesday, though, when the UFC announced that Cro Cop was provisionally suspended by USADA due to a potential ….View original article