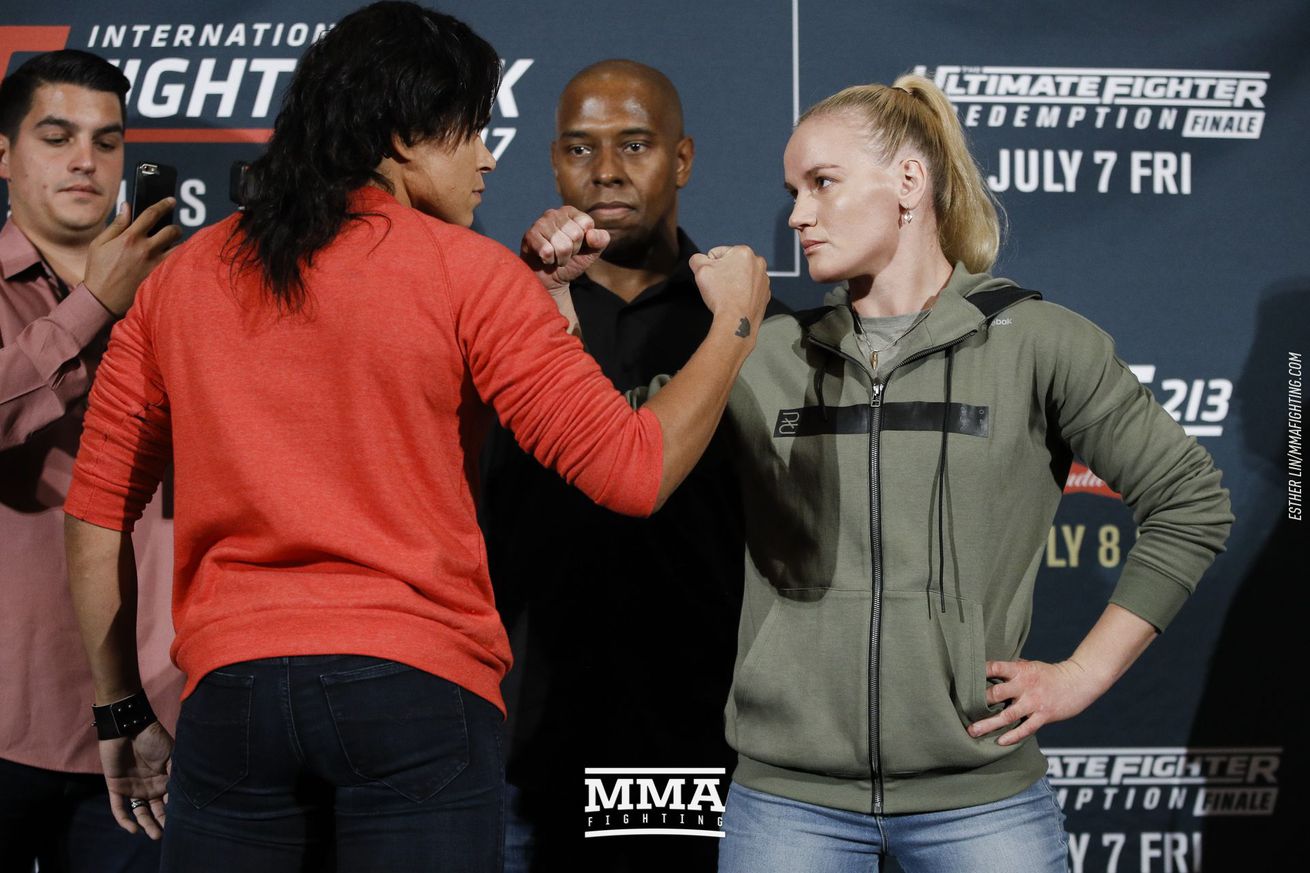 LOS ANGELES — Valentina Shevchenko was not pleased in May when Amanda Nunes got physical with her during a staredown.

At the UFC Summer Kickoff press conference in May, Nunes, the UFC women’s bantamweight champion, put her fist on Shevchenko’s cheek and pushed her with it. Nunes said Shevchenko, out of sight of the camera, touched her first. Shevchenko denies that.

The whole incident, Shevchenko said, shows her something about Nunes’ emotions going into their big main event clash at UFC 213 on July 8.

“I think she was out of control and she could not control all this nervousness,” Shevchenko said Thursday at a media day in Downtown LA. “It’s a big event, media, all this stuff. You have to be very strong to control it. A person who cannot control it, she’s acting like she acts.”

The two women have met in the Octagon before. Nunes defeated Shevchenko at UFC 196 in March 2016. It was a relatively close decision victory, with Nunes winning the first and second round and Shevchenko taking the third.

With that victory, Nunes earned a title shot against then-champion Miesha Tate, who Nunes beat by rear-naked choke submission at UFC 200 last July. Nunes went on to defend the title against Ronda Rousey via knockout in just 48 seconds at UFC 207 back in December.

Shevchenko (14-2) is confident this time around she will get the better of Nunes and walk away with the title. This fight will be a five-round affair, unlike the three-round bout last time. The Kyrgyzstan native believes that will be an advantage for her.

“It’s very sad that I could not finish that time because of time,” Shevchenko said. “Maybe one minute more, it would be different. But I’m pretty sure this time I will finish her as soon as I can.”

Shevchenko, 29, defeated Holly Holm by unanimous decision last July at UFC on FOX 20 and submitted Julianna Peña at UFC on FOX 23 in January. The latter, she said, helped her prepare for Nunes’ pre-fight antics. Peña also did some trash talk.

“If I don’t say nothing bad about my opponent, it doesn’t mean that my opponents never say it,” Shevchenko said. “Because I had that experience when Julianna Peña was talking some kinds of the same things.

Shevchenko, something of a nomad who calls Peru home and trains a great deal in Thailand, stormed onto the scene with a win over division stalwart Sarah Kaufman on short notice in Dec. 2015. She had the one hiccup against Nunes, but has looked like an elite bantamweight in her 18 months in the UFC.

That is not a surprise to her. Shevchenko is a decorated former Muay Thai and kickboxing world champion. She also has a black belt in Taekwondo. This is nothing new to her, she said.

“I’m in martial arts more than 20 years,” Shevchenko said. “It’s not like I started yesterday, like, ‘Wow I’m here, what’s happened?’ No, it’s not like this. I was prepared all my life to be where I am now.”

Nunes (14-4), meanwhile, shrugged off the suggestion that she was nervous or scared in Dallas when the physical altercation with Shevchenko occurred. After all, she has become accustomed to the spotlight over the last year.

“How am I gonna be nervous?” Nunes said. “I’ve been here so many times in the big show, bigger than this. Like [UFC] 200 was huge. My fight against Ronda was amazing. It’s not nervous — no time for that. I’m ready for her. And nothing is gonna change the result. I will walk out of the cage with the belt.”

Shevchenko, of course, disagrees. She believes Nunes’ emotional behavior will give her an advantage in the fight.

“I know how to control and I know how to react in the right moments in the right place,” Shevchenko said. “It’s like a key for the victory. … I’m never starting first, but I will not be quiet when somebody offends me. Last time, I said with that push I will respond with 10 times more punches.”