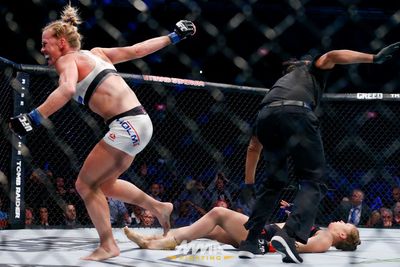 If you thought fans at the massive Etihad Stadium were going nuts after Holly Holm’s head-kick knockout over Ronda Rousey during UFC 193’s main event in Melbourne, Australia (see it again here), just wait until you see how Holly’s hometown fans in Albuquerque, New Mexico reacted.

Holm proved that she was more than ready to take on the best female fighter on the planet — despite being counted out by many — buy utilizing a great game plan and using her pro boxing pedigree to outstrike “Rowdy” from the opening bell.

The win kept Holm undefeated (10-0, 3-0 UFC) and makes her the first and only fighter to win title in boxing and MMA. And for good measure, Holly is ….View original article