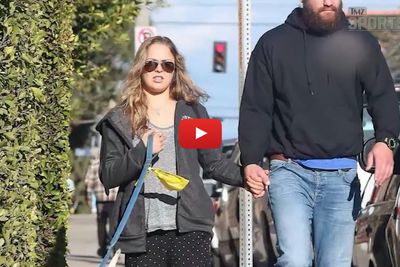 She can try to hide, but Ronda Rousey has her work cut out for her if she wants to evade the ever-present cameras of TMZ.

“Rowdy” has been a ghost since suffering the first loss of her mixed martial arts (MMA) career at the hands of Holly Holm, which took place at UFC 193 a few weeks back in Melbourne, Australia (video). That is, until she was spotted out and about in Los Angeles, Calif. walking her dog “Mochi.”

Rousey, who was accompanied by fellow UFC contender and boyfriend Travis Browne, didn’t seem too bothered by the paparazzi this time around.

The good news is, Rousey seems to be doing better physically than most people originally thought after Holm knocked her block off “Down Under.”

Just don’t expect her to return to the MMA limelight anytime soon, as she is still set on taking extended time off from fighting. She will, however, be under the Hollywood spotlight thanks to her upcoming movie role.

Plus, there’s also a matter of this small commitment.