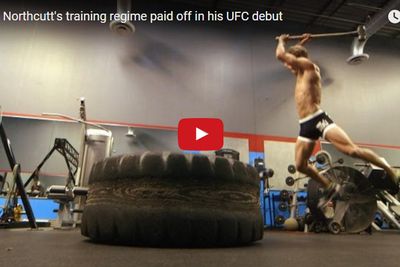 Sage Northcutt is on his way in becoming the next big thing in mixed martial arts (MMA).

And it’s not because he’s a “pretty boy,” but because the 19-year old phenom can actually fight, honing his skills since he was a five-year-old karate student.

In an effort to demonstrate that he is indeed the real deal, Northcutt delivered a memorable performance in his Ultimate Fighting Championship (UFC) debut, taking out Frank Trevino in less than one minute at UFC 192 on Oct. 3, 2015, in Houston, Texas.

The latest addition of “UFC Ultimate Insider” takes you behind the scenes in the days, hours and minutes leading up to his walk down the Octagon.

When you mix it in his looks, personality, freakish athleticism and all-around combat skills, it’s no surprise he reminds people of former UFC Welterweight champion, Georges St-Pierre.

Speaking of “Rush,” Northcutt will now train at famed Tristar gym alongside “GSP.” It’s an experience that could help him reach St-Pierre-type success.