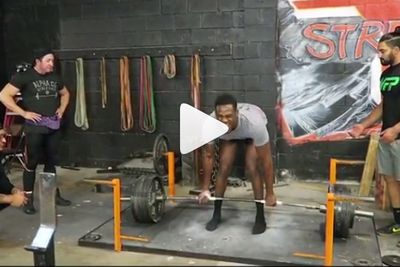 Before we get started, I know there’s some puffed-up gym rat reading this and thinking Bro, 545 pounds is not a crazy amount of weight. But when you’re a shriveled-up weakling like myself, who needs an ice pack after taking a roast from the oven, pumping that kind of iron is CRAY-ZAYYYY.

Anyway, it’s nice to see the former Ultimate Fighting Championship (UFC) light heavyweight champion spending so much time in the gym (see more of his training videos here), where he can’t rub elbows with those idiots and fall off a cliff.

Jones promised to show us how great he is in the coming months, which hopefully equates to a return to mixed martial arts (MMA). It might be the only way to get Daniel Cormier to pipe down, as “DC” continues to call for 205-pound do-over after coming up short earlier this ….View original article