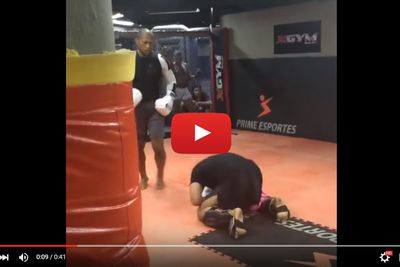 In case you forgot the incredible line up attached to the UFC 194 pay-per-view (PPV) fight card, which takes place on Dec. 12, 2015 inside MGM Grand Garden Arena in Las Vegas, Nevada, here’s a little reminder that Ronaldo Souza is fighting Yoel Romero.

It’s also a reminder that “Jacare” is a scary, scary man.

Considering the Brazilian came up through the ranks as a jiu-jitsu fighter and “punched like a girl” back in 2008, his hands look legitimately terrifying (just ask this guy) as he gears up to fight “The Soldier of God.” In fact, he dropped two of his sparring partners — with body shots — during training camp.