Home MMA News Video: Sage Northcutt gets shirtless with his boy, shoves a taser in his butt
ShareTweet 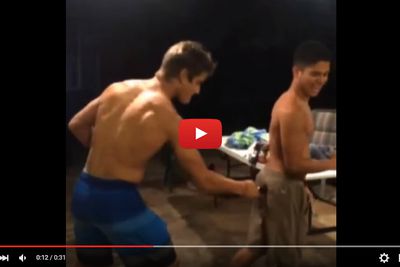 Ultimate Fighting Championship (UFC) lightweight phenom Sage Northcutt has what can only be described as an unorthodox training regimen for his upcoming fight against Cody Pfister.

Remove shirt, get tased in the ass.

Horace Pinker would be proud — though I’m not sure how much this helps him against “The Pfist.” They’ll do the deed at the upcoming UFC Fight Night 80 mixed martial arts (MMA) event on Dec. 10, 2015 inside Chelsea at The Cosmopolitan in Las Vegas, Nevada.

Northcutt (6-0) has dominated the media headlines since his UFC 192 win over Francisco Trevino earlier this year in Houston, Texas, bending frying pans and drawing comparisons to Georges St. Pierre. Naturally, none of this matters if he can’t get past his next opponent, but we would never let that stand in the way of a good story about tasers.

For much more on UFC Fight Night 80 click here.