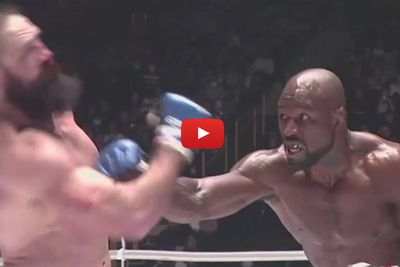 This was the mixed martial arts (MMA) equivalent of tee ball.

Credit to “The Spartan” for his iron chin, but silent jeers for the referee and his hands-off approach to the carnage.

With the win, Lawal returns for Thursday’s (Dec. 31) semifinal match up against Teodoras Aukstuolis, who smoked Bruno Henrique Cappelozza in the first round of their tournament showdown.

A victory over the Lithuanian gets “King Mo” a spot in the finals and perhaps a Fedor Emelianenko fight in 2016, depending on how “The Last Emperor” performs against Jaideep Singh (more on that here)

On a positive note, “The Spartan” looks to be okay.

For much more on the Rizin two-day event, as well as live results, check out our comprehensive news archive right here.