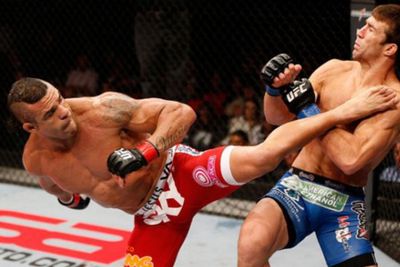 As Luke Rockhold worked his way up the 185-pound ranks, longtime friend and American Kickboxing Academy (AKA) teammate Daniel Cormier told him to forget about a rematch with Vitor Belfort and concentrate on capturing the Ultimate Fighting Championship (UFC) middleweight title.

So as you might expect, not long after Rockhold smashed Chris Weidman in the UFC 194 pay-per-view (PPV) co-main event last Saturday night (Dec. 12, 2015) in Las Vegas, Nevada (watch it again here), he called for Vitor Belfort’s head on a platter.

“My head is very well placed in my body and will remain so,” Belfort replied on Instagram. “Different from yours that apparently still spinning since 2013. Nothing is personal, it is all about business!”

Belfort is currently ranked No. 3 in the division.

Rockhold was knocked out by a spinning wheel kick back in 2013 — courtesy of “The Phenom” — back in 2013. It was only the second loss of his mixed martial arts (MMA) career and it comes with an asterisk for some fight fans, who file it under the TRT-tor era.

Only one way to find out for sure, though I think Yoel Romero might have something to say about that.