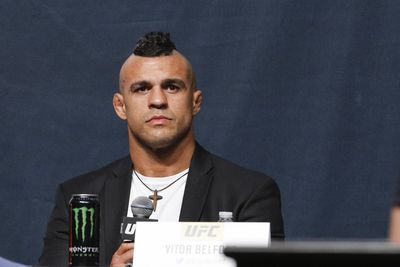 The Brazilian veteran stepped in to face light heavyweight champion Jon Jones on short notice on Sept. 22, 2012, and was cleared to compete even though his pre-fight test raised a red flag.

Josh Gross reported in September, three years after the fight, that the UFC knew about Belfort’s test and still cleared him to compete. According to the fighter, he was just starting his testosterone replacement therapy (TRT), and everyone involved approved his drug test results.

“I was starting my treatment and I had an approval of my doctor and with the UFC, so, they need someone to step into the fight,” Belfort told Inside MMA. “I offered myself. I shared all my tests, my exams with them, and one went public, I think they shared my privates, but everything got approval.”

Belfort’s interview with Inside MMA comes days after the fighter cancelled an appearance on The MMA Hour, when Ariel Helwani denied a request from Belfort’s wife Joana Prado to ignore the controversy on his show.

“I never hide anything from anybody,” Belfort said. “You know the media. I’ve always received them in my ….View original article