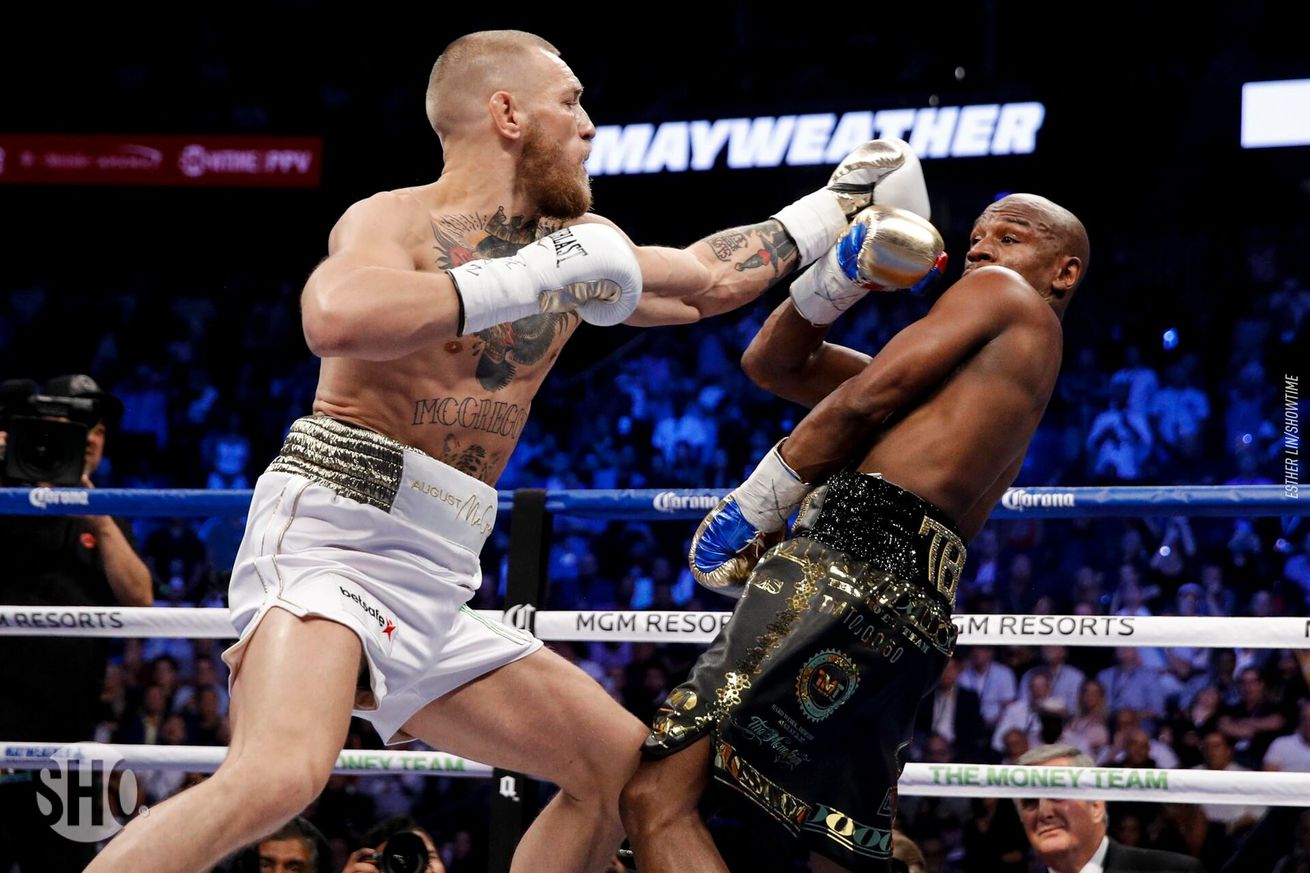 Now that it’s all said and done and we have a moment to reflect on whatever the hell it was that happened, a couple of things seem clear. For starters, Conor McGregor was never going to win on the scorecards in a boxing match with Floyd Mayweather. Not in Nevada, anyway. Most who watched Saturday’s extortionate mega-bout were astonished by McGregor’s fast start and adaptability, scoring the first three rounds in his favor. However, this didn’t extend to the gavels of record. Two of the judges gave McGregor a single round — the first, in which he acted as the aggressor — and all the rest to Floyd.

It was up to McGregor to knockout Mayweather out and, to his credit, he gave it the old frosh try. Luckily it didn’t end up mattering.

Another thing that crystallized by midnight on the west coast — McGregor was never going to win over those that didn’t want to be won over. McGregor’s effort was nothing short of remarkable given that A) it was his pro boxing debut, B) he was going against a colossus of the squared circle, and C) he didn’t shrink under those freaking circumstances. He stood fairly tall, really, against a man who has dwarfed a good many talents. His skills came out, even if he couldn’t help himself from rabbit punching Mayweather’s head when the fight got snug (or occasionally taking his back). A healthy portion of those that tuned in were never going to accept the interloper, and weren’t about to change their minds after seeing McGregor last into the tenth round.

Why this is the case probably boils down to a territorial stubbornness. McGregor could have floated in on a magic carpet throwing fireballs and the tweets would still show up saying, “Dude, Floyd is 40! #GTFO!” Yet had there been a crowbar handy to pry open those minds here’s guessing an important fact might have trumped any complaints: Namely, that Saturday’s main event was the most entertaining Floyd Mayweather fight in years. During the latter part of his quest to 50 wins there’s been a tradition of disappointment accompanying Mayweather’s bouts. McGregor actually fetched an exciting fight out of him. McGregor made him engage, and execute an offense. He made Mayweather slam his flashy gloves into his chin. He made Mayweather introspective about his dull affair with Manny Pacquiao. Why any of that could be a bad thing is beyond me.

Even for a fight that never felt quite right and nor got easier to understand beyond the realm of money and ego, these things stood out. There was a lot to admire in McGregor’s effort, including the big picture ease in which he took his defeat. McGregor replayed the fight at the press conference and told people comforting things about the experience. He lost the way he fought — with dignity. And there wasn’t an ounce of true malice to be found after the fact. In anything, McGregor appeared to genuinely appreciate what it meant to fight Mayweather in a swan song. Mayweather boomeranged those sentiments right back at him. (And if anybody ever looks at you the way James Ellerbe looks at Conor during his orations — with little red hearts floating out of his eyes, and an all-forgiving smile — keep that person close forever).

In the end, it was weird thing for boxing to endure, but it was the strangest damn thing MMA has ever been through. MMA followed McGregor straight to the boxing ring, and stood along him vicariously. MMA was riding shotgun with McGregor on a grand adventure, yet could only go with him so far. He alone staked the very real threat of humiliation by taking on one of the sport’s best. Somewhere along the way there was solidarity, and old hatchets got buried. Eddie Alvarez, who had no love for McGregor before they fought in November in New York, was sending messages of support. Ditto current featherweight champion Max Holloway, who fought McGregor in 2013 (his last loss). Daniel Cormier had warm words, and Chris Weidman. So many in the MMA sphere populated the Big Picture which McGregor helped paint. And even those in MMA that hate McGregor couldn’t help but understand exactly what it was he was doing, at a specific juncture in time. His fight was theirs, too, and that fight meant more than anyone cared to let on.

The truth is, McGregor wasn’t humiliated. Some people said he wouldn’t land a punch. Many said it would be an easy fight for Mayweather, or that Conor would have to resort to cheating (coming from the unruly Wild West of cagefighting!) National media that had dipped a toe in boxing but never bothered to in MMA cage couldn’t fathom an outcome like the one we got. The boxing media, some of them perched on pedestals from which to spit with range, didn’t realize it wasn’t only undermining McGregor, but all those who saw him for what he is — a man who laid it on the line, yet even in defeat came out a winner.

And anybody who didn’t understand that is probably never going to.