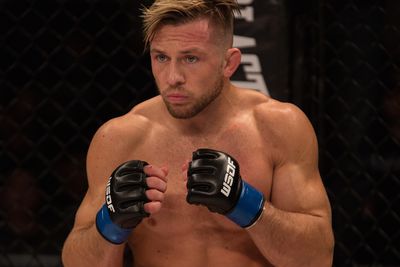 WSOF 26: “Palmer vs. Almeida” took place tonight (Fri., Dec. 18, 2015) at The Chelsea of The Cosmopolitan in Las Vegas, Nevada. In the main event, Lance Palmer defended his Featherweight title against Alexandre de Almeida.

The latest event for World Series of Fighting (WSOF) took place earlier tonight (Fri., Dec. 18, 2015) inside The Chelsea at The Cosmopolitan in Las Vegas, Nevada, airing live on NBC Sports Network with a world title defense in the Featherweight division.

‘The Party’ Lance Palmer was already seen as the favorite going into the main event, not only for his 10-1 record as a pro, but for being the only Featherweight champion in WSOF history to successfully defend his title. He’d have to prove it one more time against surging Alexandre de Almeida (17-5), winner of four straight fights.

If you score the fight by takedowns alone, Lance Palmer likely won the first round and clearly won the final round. If you score by effective striking, Almeida outpointed his opponent in the second and third round. The only debatable round was the fourth – Palmer controlled him for the final two minutes on top but hadn’t been doing well before the takedown.

In the end the judges felt Almeida did indeed take three out of five rounds, making him your NEW World Series of Fighting Featherweight champion by scores of 48-47 across the board.

At least we got to see Palmer execute an excellent defense of a judo throw during the fight.

The co-main event featured two Lightweights, who in some respects lucked out by not having to enter the grueling WSOF 25 Lightweight tournament. Ozzy Dugulubgov (7-2) put his two fight ….View full article