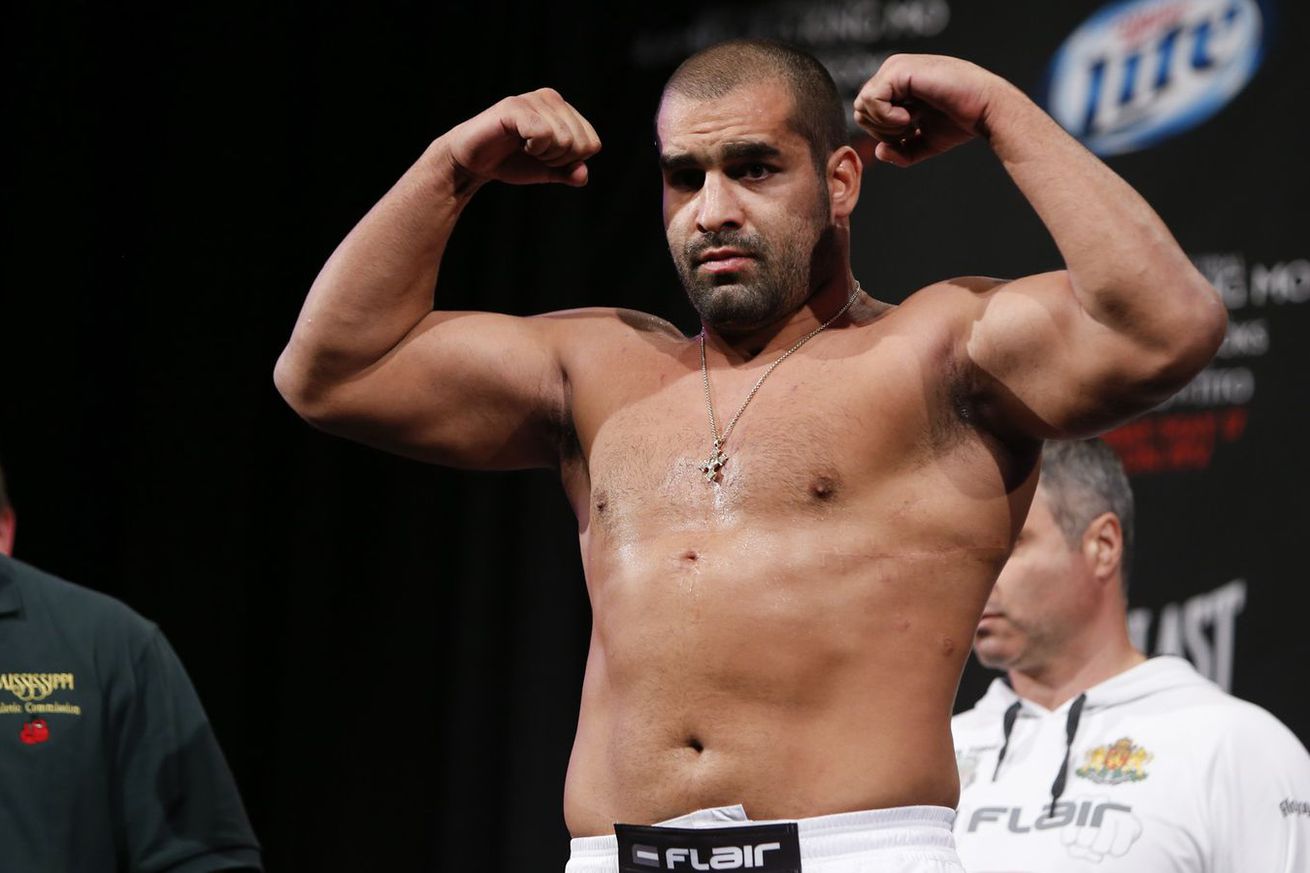 It’s a wrap, fight fans! WSOF 35 took place last night (Sat., Mar. 18, 2017) inside Turning Stone Resort Casino in Verona, N.Y., airing live on NBC Sports Network. The headlining fight of the night was the third of three title bouts for the evening, this one capped at a limit of 265 lbs.

Blagoy Ivanov makes the most of that limit, packing a lot of powerful muscle into his 5’11” frame, but former Ultimate Fighting Championship (UFC) heavyweight contender Shawn “The Savage” Jordan was looking to upset the Bulgarian brute and prevent him from making a third successful title defense.

Ivanov didn’t need long to get the job done. After a first minute of Jordan trying to pressure Ivanov into the fence, Ivanov clipped him with a left and stung him with an even a bigger left to the head as he was retreating. When Jordan crumpled to the ground Ivanov poured it on until referee Dan Miragliotta had seen enough.

The official time of the stoppage via technical knockout was 1:43 of the first round.

“Thank you first. I prepare very good for this fight. I did a couple of camps. I was ready for this. I was ready for five rounds. I want to fight with the top opponents to be good attraction. I’m happy thanks to WSOF — they give me (a) good opportunity.”

Second from the top was featherweight champion Lance “The Party” Palmer, looking to make his first defense after regaining the title from Alexandre Almeida, but having to do so against Bellmore Fighting prospect Andre Harrison. Harrison was 15-0 coming into the co-main event.

If it’s possible to win an entire round and then lose it in the last 25 seconds, that’s what happened to Palmer in Round 1, who had been fighting a perfect tactical striking battle until he got blasted by one big right hand. He popped up quickly but the knockdown that late would definitely be memorable to a judge.

Things got even better for Harrison in Round 2 as he scored a high kick to the head that had Palmer backpedaling, and when he ran out of real estate against the fence he went down and Harrison got on top to grind elbows into his face. Palmer recovered to full guard and used a butterfly guard to stand before the bell sounded, but clearly lost the round.

Palmer’s best round may have been the third as both men sought to exchange standing but neither one landed a kill shot. So unlike the first there was no knockdown to swing it Harrison’s way. Harrison out-struck him in the fourth though and only an errant kick to the cup (his second of the fight) slowed his momentum.

The fifth and final round was time for Palmer to dig deep, but Harrison once again tagged him with a big left hand and busted his face open in the process. Palmer’s head painted the canvas as he attempted to save himself with a single leg, and when the sprawling Harrison let Palmer back to his feet, he slipped on a pool of his own blood. A late single leg attempt for Palmer yielded no dividends.

The judges gave a unanimous decision to new 145-pound champion Harrison 49-46 and 48-47 X2. Harrison spoke to another Harrison — Olympian Kayla Harrison — after claiming the gold.

“I was real confident, I had a great great training camp. I knew it was gonna happen. Sometimes I get a little hard headed. That’s what they’re there for to make sure I get right back on it. I was feeling good. My cardio was A-1. I can go ten rounds if need be. I’ve got the best coaches in the sport when it comes to Bellmore Kickboxing — you’re not finding a better team than that.”

The title around his waist seems to prove his point.

Rounding out the broadcast was a bantamweight bout to crown a new champion following the departure of long-standing titleholder Marlon Moraes. The two leading contenders for that belt were Bekbulat Magomedov (16-1) and former flyweight title contender Donavon Frelow (6-1).

Magomedov largely had his way against the smaller Frelow in Round 1, although Frelow did stun him with one overhand right that dropped Magomedov to a knee for a second. The rest of the round was Magomedov’s as he took Frelow to the mat over and over again.

Frelow did not land a single knockdown shot in the second or third round, nor much of anything you could call a significant strike, which had the crowd openly booing halfway through Round 3. Magomedov kept taking him down at will into Round 4 and finally got a full back mount but couldn’t complete a rear-naked choke before the bell.

Magomedov quickly secured one more takedown to open the fifth frame and spent the rest of the round improving his position on the ground. He looked for a back mount, Frelow blocked it, he went for a full mount, Frelow tried to scramble, Magomedov took him back down and got the hooks in. Frelow blocked all the submission attempts but he couldn’t get out of the body lock or away from the inevitable decision.

For the second title fight in a row, Frelow went down on all three scorecards, crowning Magomedov the new 135-pound champion by scores of 50-45 X3.

Check out our live streaming results RIGHT HERE to see who else made a name for themselves inside the cage at WSOF 35 in Verona.