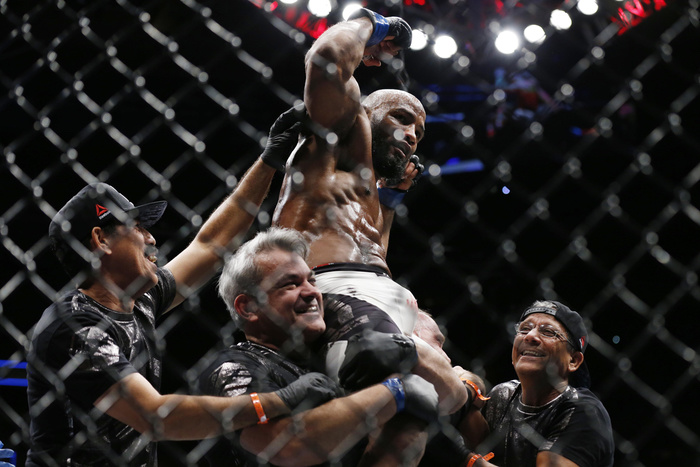 It took the authorities in New York State nearly 20 years to allow professional mixed martial arts within its borders, but it only took them a single event to show they’ll be governing the sport with an iron fist.

Today the New York State Athletic Commission announced it had suspended UFC middleweight Yoel Romero 60 days for hopping over the fence following his knockout victory over Chris Weidman at UFC 205 earlier this month. After landing a flying knee to Weidman’s head the Cuban-born fighter, nicknamed “Soldier of God,” leapt over the Octagon with joy and proceeded to march and salute his way around the outer perimeter of the cage before coming back in for the fight’s official announcement.

Leaving the cage is generally frowned upon by athletic commissions and may even be forbidden by some, but they tend to look the other way when a fighter is suddenly overcome with the desire to celebrate with his teammates or salute a crowd. This is a sport after all. Former UFC featherweight champion Jose Aldo famously ran into the adoring crowd at the HSBC Arena in Rio de Janeiro after knocking out Chad Mendes on January 14, 2012, but all he got for his sins were the disgruntled looks of the security officers charged with getting him back. Yoel Romero is the first fighter I’ve heard of earning a suspension for such a violation, but then UFC 205 was the first-ever MMA event regulated by the New York State Athletic Commission, and whether their intent is to always be this fanatical or if their actions were like those of an overeager rookie schoolteacher going overboard on the first day of class out of fear and confusion remains to be seen.