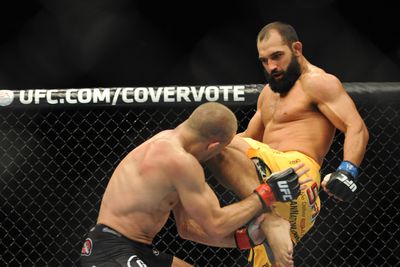 Try getting hit by this Mack Truck.

Johny Hendricks has had a rough go of late.

The former UFC Welterweight champion struggled to make weight — something that the 32-year-old has sadly become known for — for his UFC 192 pay-per-view (PPV) pairing with Tyron Woodley back in October and was thought to have been banished to the Middleweight division, according to UFC President Dana White.

That was until he heard the public service announcement made by weight-management specialist Louis Giordano, who has the tall task of accompanying the venison-crazed “Bigg Rigg” down to the 171-pound limit for his upcoming clash with Karate standout Stephen Thompson at UFC 196 on Feb. 6, 2016.

From the sound of things, the partnership seems to be going well and has renewed Hendricks’ confidence so that he can reach the top of the 170-pound mountain once again.

The Oklahoman spoke to MMA Junkie about his tilt with “Wonderboy”:

“I still have it; I still feel I’m still young at heart. I still move, I’m still fast, I still hit hard, and I have everything to get back to it. I know what I want to get back because I’ve tasted it. That’s the difference between me and him right now. He wants it. I get that. I understand that. But it’s me. It’s not somebody else he’s fighting – it’s me. If he has that fire, that’s fine because I can match anyone’s intensity no matter how high they want to go or how low they want to go. I’ve proved that time and time again. Can he match mine? That’s the question. When he gets hit by me, will he still be in there? That’s ….View full article